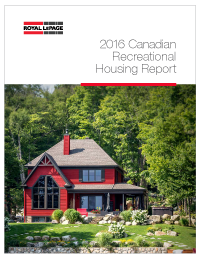 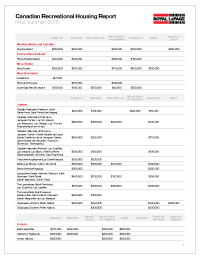 Toronto, ON, June 23, 2016 – Generation X buyers of cottages, cabins and chalets across Canada outnumber Baby Boomers by almost two to one, according to the Royal LePage 2016 Canadian Recreational Housing Report released today. Still, planning for retirement living is among the most common reasons potential buyers give for the purchase of a recreational property.  The annual report compiles information from a cross-Canada survey of real estate advisors who specialize in recreational property sales.

The survey found that 65 per cent of advisors polled indicated that potential purchasers were considering their retirement needs in deciding to buy a recreational property, while a significant number of respondents (88 per cent) said that potential purchasers identified desired lifestyle and vacationing as their main purpose. Just under half of respondents (49 per cent) said that clients wanted a recreational property as an investment and a little over a third (37 per cent) indicated that low interest rates were a deciding factor.

The family status of the typical recreational property buyer is a couple with children, according to 76 per cent of survey respondents. When asked about the most prevalent age range of current buyers, 63 per cent of respondents identified Gen Xers (36 to 51 years old), almost double the 33 per cent who identified Baby Boomers (52 to 70 years old).

“We found it interesting that a majority of respondents identified retirement as a driving factor for a recreational property purchase consideration, but Gen Xers, still decades from retirement, were identified as the typical buyer in the current market,” said Phil Soper, president and chief executive officer, Royal LePage. “This cohort, having reached a place of stability, and often owners of primary residences in the country’s city centres, is making recreational property purchases for family enjoyment in the near-term and as a key strategy for retirement.”

“Canada’s extended low interest rate environment has clearly provided buyers with the confidence they need to invest in a cottage or cabin,” added Soper. “In contrast to urban home purchase decisions, buying a property on a lakefront or mountainside is much less about interest rates, and more about enhancing lifestyle. Cash savings trump mortgage financing when it comes to how people are acquiring recreational property.”

Almost 95 per cent of respondents stated that foreign buyers[1] were responsible for 10 per cent or less of recreational property transactions. When asked to identify where foreign buyer activity originates from, the most common answer was North America (79 per cent), with the majority (64 per cent) of those who specified a country of origin stating purchasers were Americans.

Respondents were split on factors driving international  interest between the quality of living in Canada (30 per cent), geography (27 per cent) and the low Canadian dollar (27 per cent).

“We Canadians enjoy a wonderful recreational real estate reciprocity with our American cousins. Like flocks of happy geese, we fly south in the winter, and in return, Americans head to the beautiful north country when summer arrives. Canadians have been, for years, the principal foreign buyers of sunbelt property in states like Florida and Arizona, while a lower Canadian dollar has encouraged a new wave of U.S. buyers here,” said Soper.  “Whether recreational property buyers live in Canada or come from abroad, the beauty of this country, from coast-to-coast, is the appeal for families looking to ‘get away’ and enjoy the cottage experience, one that is quintessentially Canadian.”

While common elements impacting the country’s regional recreational property market can be identified, variability in provincial economies and inter-provincial migration has resulted in disparate local conditions. Depressed oil prices may have dampened the recreational property activity in energy-dependent regions, and caused workers who moved for energy jobs to return to their home provinces. These provinces have seen a general uptick in demand for real estate, as the older, repatriated workers look to spend their savings on leisure properties.

Across the country, roughly two-thirds  (67 per cent) of those polled said they have seen increases in sales over the past 12 months, and over half (53 per cent) expect sales activity in 2016 to exceed 2015 levels.

British Columbia saw year-over-year[2] price appreciation, and Royal LePage expects sales activity to increase throughout the remainder of the year. Advisors cited demand from retirees as a major factor driving the market.

In Alberta,  sentiments were somewhat mixed, with advisors generally expecting continued softness in both price and sales activity in the coming year.

In neighbouring Saskatchewan, recreational property prices were up slightly compared to last year, with inventory and demand levels remaining stable.

In Ontario slight increases over last year were reported in both price and sales volumes  across the recreational property communities studied, with inventory levels slightly down in most markets.  Looking ahead, Ontario’s recreational property markets are expected to be active for the remainder of 2016.

Similarly in Quebec, most reported that recreational property prices and activity levels have been showing slight increases this year over last, with sales volumes projected to remain healthy for the remainder of the year.

Atlantic Canada recorded that regional market conditions were mixed. Advisors in Nova Scotia reported slight year-over-year price and sales activity increases, while recreational property markets in New Brunswick remained stable on both fronts. In contrast, Newfoundland’s recreational property market reported slight decreases in prices and sales when compared to the same period last year. In light of the negative economic impacts of the oil industry’s downturn, this softness is expected to continue for the remainder of 2016, as buyers and sellers wait on the sidelines amid market uncertainty.

The chart below provides average 2016 prices across Canada for six recreational property types studied in the report including lakefront, riverfront, oceanfront, island, woods cottage/cabin, and resort/condo.

[1] For the purposes of the Report, “foreign buyers” are defined as buyers who live outside of Canada all, or most of the time.