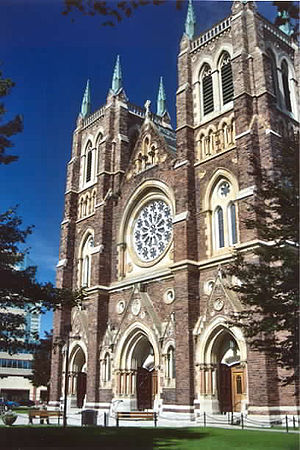 London is a city in Southwestern Ontario, Canada, situated along the Quebec City-Windsor Corridor. The city has a population of 366,151 according to the 2011 Canadian census. London is the seat of Middlesex County, at the forks of the non-navigable Thames River, approximately halfway between Toronto, Ontario and Detroit, Michigan. The City of London is a separated municipality, politically separate from Middlesex County, though it remains the official county seat.London was first settled by Europeans between 1801 and 1804 by Peter Hagerman and became a village in 1826. Since then, London has grown to be the largest Southwestern Ontario municipality, and Canada's 11th largest metropolitan area, annexing many of the smaller communities that surrounded it. The city has developed a strong focus towards education, health care, tourism, and manufacturing.London is home to Fanshawe College and the University of Western Ontario, which contributes to the city's reputation as an international centre of higher education, scientific research and cultural activity. The city hosts a number of musical and artistic exhibits. London's festivals contribute to its tourism industry, but its economic activity is centred on education, medical research, insurance, and information technology. London's university and hospitals are among its top ten employers. London lies at the junction of Highway 401 and 402, connecting it to Toronto, Windsor, and Sarnia. It also has an international airport, train and bus station.Prior to European contact in the 18th century, the present site of London was occupied by several Neutral and Odawa/Ojibwa villages. Archaeological investigations in the region indicate that aboriginal people have resided in the area for at least the past 10,000 years.The current location of London was selected as the site of the future capital of Upper Canada in 1793 by Lieutenant-Governor John Graves Simcoe. Simcoe intended to name the settlement Georgina, in honour of King George III, and renamed the river. However, the choice of a capital site in the midst of extensive hardwood forests was rejected by Guy Carleton (Governor Dorchester). In 1814, there was a skirmish during the War of 1812 in what is now southwest London at Reservoir Hill, formerly Hungerford Hill. Search Homes for Sale in Neighbourhoods in and around London