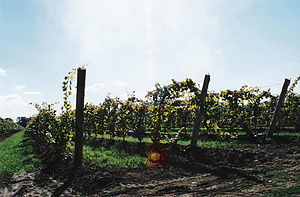 St. Catharines (2011 population 131,400; metropolitan population 392,184) is the largest city in Canada's Niagara Region and the sixth largest urban area in Ontario, with 96.11 square kilometers of land. It lies in Southern Ontario 51 kilometres (32 mi) south of Toronto across Lake Ontario, and is 19 kilometres (12 mi) inland from the international boundary with the United States along the Niagara River. It is the northern entrance of the Welland Canal. Residents of St. Catharines are known as St. Cathariners.St. Catharines carries the official nickname "The Garden City" due to its 1,000 acres (4 km²) of parks, gardens and trails.St. Catharines is situated in an area for commerce and trade since it is located between the Greater Toronto Area (GTA) and the Fort Erie- US Border. Manufacturing is the city's dominant industry, as noted by the heraldic motto, "Industry and Liberality". General Motors of Canada, Ltd., the Canadian subsidiary of General Motors, operates two plants in the city (one plant was partially shut down in 2010) and until recently was the city's largest employer, a distinction now held by the District School Board of Niagara. TRW Automotive operates a plant in the city, though in recent years employment there has shifted from heavy industry and manufacturing to services.St. Catharines lies on one of the main telecommunications backbones between Canada and the United States, and as a result a number of call centres operate in the city.The city was first settled by Loyalists in the 1780s. Early histories credit Serjeant Jacob Dittrick and Private John Hainer formerly of Butler's Rangers, among the first to come to the area taking up their Crown Patents where Dick's Creek and 12 Mile Creek merge, now the city centre of St. Catharines. Although never documented, some local St. Catharines' historians speculate Dick's Creek was named after Richard Pierpoint, a black Loyalist. Secondary to water routes, native trails provided transportation networks, resulting in the present day radial road pattern from the City centre. The surrounding land was surveyed and Townships created between 1787 and 1789. Search Homes for Sale in Neighbourhoods in and around St. Catharines