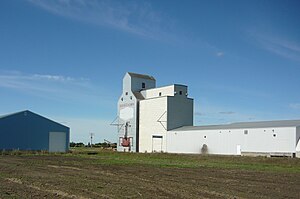 Langham is a Canadian town in Saskatchewan. It is located on Highway 16, twenty seven kilometers northwest of the city of Saskatoon. The 2006 census reported a population of 1120, with 452 homes in the community. The positive Saskatchewan economy has resulted in a housing boom that will cause up to 300 new homes to be built and the population to double by 2018.Originally, the area was primarily settled by Mennonites. Langham was named after E. Langham, a purchasing agent for the Canadian National Railway. Langham was founded in 1904 with the building of a rail line between Saskatoon and Edmonton, Alberta. Langham was declared a village in 1906, and became a town in 1907.There are two public schools to service the children of Langham and area. Approximately 150 Grades K to 5 students attend Langham Elementary School, while approximately 210 Grades 6 to 12 students attend Walter W Brown High School. Both schools are part of Prairie Spirit School Division, which includes communities that surround the city of Saskatoon. As well, 3 and 4 year olds can access a preK program at Li'l Vikings Preschool. And at the Elementary there is a before and after school program for any grade preK - 5.The town's economy is based on commuters to the nearby city, and on agriculture. There are a number of local businesses, which include a general car maintenance and repair shop, insurance services, an autobody repair shop, a financial institution, restaurants, bed & breakfast, daycares, gas bar, chiropractor, and beauty salon.Langham is home to a branch of the Wheatland Regional Library, which is open throughout the year, offering story time programs for young children. Each fall, the Langham Theatrical Company host and perform a dinner theatre for the first two weeks in November. The Langham & District Heritage Village & Museum is open from May long weekend to September 30. The museum's purpose is to showcase and preserve the artifacts that show the history and development of Langham and District. River Valley RV Park has 31 fully serviced campsites and is located on the edge of the Town of Langham. The River Hills Golf Course is a 9 hole course situated on the Saskatchewan River approximately 5 km north of Langham. In the winter, groomed ski trails allow this facility to be used year-round. Langham is home to the Moffat Galleria, which serves as both an art studio for artist Kris Moffat, and a gallery for showings. There are also painting and drawing classes offered throughout the year for all ability levels. Search Homes for Sale in Neighbourhoods in and around Langham