Recreational property sales expected to grow 4.4% over the next year 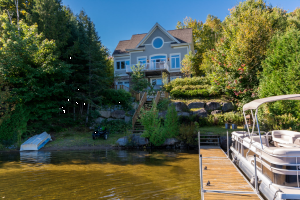 MONTREAL, June 6, 2019 – According to data collected[1] as well as a survey conducted among Royal LePage recreational property experts in twelve markets across Quebec, sales activity will continue to rise in the upcoming year, reflecting similar growth in the province’s urban real estate markets.

“Quebecers are benefitting from one of the healthiest economies in the country right now and are confident investing in real estate and long term projects, including recreational property,” explained Dominic St-Pierre, vice-president and general manager, Royal LePage, for the Quebec region.

“The increase in sales activity is driven by Quebec’s job market strength, where the unemployment rate in April sat below 5 per cent for the first time since 1976. Salaries continue to rise in the province due to full employment, providing further consumer confidence,” said St-Pierre. “We are also noticing a surge of buyers between the ages of 40 and 60 looking to enjoy the cottage lifestyle and spend more time with the family.”

The recreational market is forecast to remain active in 2020

Royal LePage experts surveyed predict sales for recreational properties in the province will increase 4.4% in 2020[3], signalling that despite recent floods affecting several regions of Quebec and the late spring, demand for this property type continues to grow. The province is also expected to surpass the national recreational sales average (-0.4%) next year and see a 5.6% increase in recreational property median price next year.

Among the twelve Quebec regions surveyed, Portneuf, east of Quebec City, saw the highest appreciation rate of waterfront properties, with prices increasing 17.9% year-over-year, reaching a median price of $224,000. Pays d’en-Haut and Papineau followed with respective increases of 11.7% and 11.2%, reaching median prices of $335,000 and $200,000.

In terms of sales, the Jacques-Cartier region north of Quebec City witnessed the greatest increase in waterfront property sales (32%), just ahead of the Montcalm region in Lanaudière, which saw a 31.7% increase. Gaspésie experienced a 21.7% jump year-over-year.

Top 3 regions selling the most waterfront single-family properties in 2019:

Top 3 regions with the highest median prices for waterfront single-family properties in 2019:

North of Mont-Tremblant, the Antoine-Labelle recreational market (including the regions of Ascension, Macaza and Mont-Laurier), saw a notable increase in activity, with waterfront property sales increasing by 12.9% year-over-year. The median price for a waterfront single-family home in the region remained flat at $170,000, while the median price for all single-family properties rose by 5.3% year-over-year, reaching $148,500.

According to Vaillancourt and Gauthier, recreational property sales are expected to increase by 7.0%, while prices in the region should climb 3.0% over the next year.

“Property prices on the region’s most popular lakes have surged in recent years, but we are headed toward a restored balance,” said Melissa Roussin, broker owner, Royal LePage Pro in Thetford Mines. “However, it is important to qualify. These days, a waterfront property on Lake Saint-François sells between $400,000 and $700,000. Buyers — often professionals or retirees returning to the area — can afford such an investment and choose to make it their primary residence.”

Roussin forecasts that prices will remain stable for the coming year while sales will increase by 5.0%.

“The Argenteuil recreational real estate market remains constant and is doing well, despite slow sales that persisted over the past two years,” said Pierre Vachon, a real estate broker serving the area since 2006 at Royal LePage Humania. “Spring flooding has significantly impacted our region this year. The market is likely to adjust in the coming year. Second- and third-row properties are be popular because they provide the best of both worlds: living in a safe area while accessing the water.”

Vachon anticipates a sales increase of approximately 6.0% and a price increase of 3.0% in the coming year.

The embodiment of vacation life, Gaspésie remains a signature spot for many Quebec families looking for the perfect summer getaway. The region saw significant waterfront property sales activity in 2019, up 21.7% year-over-year. However, the median price of a single-family property along the St.Lawrence in the region fell 12.1% to $116,500, ranking the area amongst the most affordable recreational property regions in the province. During the same period, the median price of single-family properties (both waterfront and non-waterfront) reached $120,000, increasing 0.8%.

“Although prices are declining, the recreational real estate market in Gaspésie remains strong,” said Christian Cyr, real estate broker, Royal LePage Village. “With nearly 700 job vacancies, the region is attracting buyers from across the province who want to live and work close to their roots and enjoy a less stressful lifestyle. We are seeing a lot of young professionals moving here as well as baby boomers selling to downsize or join their children in the city,” he said.

Cyr added that seaside damage caused by 2017 winter storms in Eastern Quebec contributed to buyer uncertainty. The Canadian government has committed $2,107,599 for the restoration of coastal habitats along the Gaspé coast.

He expects sales to decrease by 10.0% and prices to rise 10.0% in the coming year, given the renewed demand and low inventory in the region.

Bonenfant estimates that both sales and property prices in Jacques-Cartier will remain relatively stable in the coming year, both increasing by 1.5%, considering that 2018 was unusual compared to the previous year.

“The new version of the interim control bylaw recently ratified by the mayors of the Quebec City, Lac-Delage, Stoneham, and Sainte-Brigitte-de-Laval will be much less restrictive in terms of new construction, which should help further stimulate the real estate market,” added Bonenfant.

Laurentians (from Val-Morin to Labelle to Mont-Tremblant)

The immense “playground” of the Laurentians region on the outskirts of Mont-Tremblant continues to attract buyers interested in outdoor sports. That said, prices over the past year have appreciated slightly, with the median price of single-family homes rising 3.3% year-over-year to $206,500, while waterfront properties rose by 1.2%, reaching $248,000.

“The Laurentians are home to many lakes and the price range can differ greatly from one location to another,” said Paul Dalbec, real estate broker and manager, Mont-Tremblant Real Estate, a division of Royal LePage. “Of course, if we were to only look at  lake properties located five minutes from the Mont-Tremblant ski station, we would get a much higher median price. But there are several lakes where it is possible to become a cottage owner without entering the higher-end category.”

Dalbec estimates that both sales and prices will rise by 5.0% over the next year.

In terms of sales, the number of waterfront property transactions increased 13.0% year-over-year in Matawinie, and by 31.7% in Montcalm.

“Lanaudière is quite a vast territory, where prices vary a lot from one place to another, explained Guylaine Pelletier, real estate broker, Royal LePage Habitations. For example, the Saint-Donat area is reputed for its higher-end properties. Across Matawinie, nine properties were sold over the one million dollar mark in the past year.”

Pelletier forecasts that recreational property prices in Matawinie will make modest gains in the next year, increasing 5.0%, with continued robust sales increasing 10.0%. Montcalm, on the other hand, is predicted to see a sales drop of 10.0% and a median price increase of 10.0%.

One of the most popular recreational areas in the province, Memphrémagog continues to charm city-dwellers with its laid-back atmosphere and variety of family activities.

“The real estate market in Memphrémagog has been strong this year, but the previous one had been exceptional,” said Christian Longpré, broker owner, Royal LePage Au Sommet. He perceives that “the number of homeowners renovating their properties has increased dramatically, and therefore, they sell much faster.”

Longpré believes that the revitalization of downtown Magog also contributes to the booming real estate market, since vacationers still like to experience a bit of the city. Many infrastructure upgrades are also underway at Mount Orford to accommodate year-round events.

Waterfront property sales in the Papineau region along the Ottawa River rose 3.2% year-over-year. The median price of waterfront properties increased by 11.2% to $200,000 in the last year, while the price of single-family properties across the region rose 4.6% to $150,600.

“With urban property prices rising, the suburbs have become more attractive to first-time buyers,” said André Mayer, agency manager, Royal LePage Vallée de l’Outaouais. “Many buyers are commuting, even though it takes longer to get to town. Despite an increase in prices, the Papineau market remains accessible.” He added that many buyers come from across the river, since there are not many recreational markets around Ottawa.

The Outaouais region was hit hard by floods in both 2017 and 2019.  “It’s hard to predict the impact of the 2019 floods. However, if the past is an indicator of the future, there will always be buyers interested in waterfront properties in the area.”

Mayer believes that the region will continue to see sales and price increases of 8.0 and 5.0%, respectively, in the coming year.

Located 45 minutes north of Montreal, the Pays d’en-Haut region, which extends from Wentworth-Nord to Estérel, is among the highest-priced of Quebec’s recreational regions. The median price of a single-family property increased by 4.2% ($250,000), while waterfront property prices rose 11.7% ($335,000). Waterfront property sales dropped 10.9% over the past year.

“Although our region has some of the highest waterfront property sales volume in the province, the price gap between waterfront and non-waterfront properties is nearly of $100,000, which can have an impact on sales,” said Éric Léger, real estate broker, Royal LePage Humania E.L. “Waterfront property prices are also beginning to adjust, which should lead to a gradual recovery in sales in the coming months.”

Looking into the next year, Léger estimates that sales and median prices of recreational properties will grow by 9.0% and 4.0%, respectively.

With its many lakes, proximity to Quebec City, and reputation as a recreational market, it is not surprising that the price of waterfront properties in Portneuf has had the highest appreciation rate in the province (17.9%), reaching a median price of $224,000. The median price of single-family homes across the region is $180,000.

“Buyers were attracted to high-end properties in the region during the past year,” explained Sandra Tremblay, real estate broker, Royal LePage Inter-Québec. “Buyers in the region are typically professionals between the ages of 40 and 60 who want to stay near the city while enjoying a stress-free environment close to nature,” she added.

Tremblay indicates that property prices rise the closer you get to Quebec City. For example, a property located on Lac-Sept-Îles sells for around $500,000 while one on Lac-Blanc is $300,000. These buyers will typically purchase to live there all year long.

Tremblay expects sales and property prices to increase by 10.0% and 12.0%, respectively, over the next 12 months.

[1] Single-family price and sales data collected by Royal LePage through Centris in the 12 studied recreational regions.