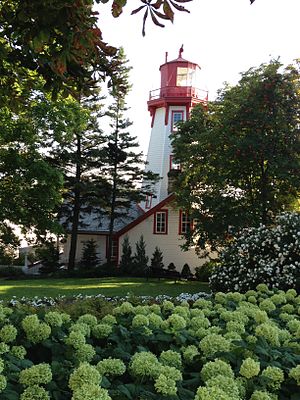 Kincardine is a municipality located on the shores of Lake Huron in Bruce County in the province of Ontario, Canada. It has a population of more than 11,000. The namesake town is located at the mouth of the Penetangore River, and was founded in 1848 by the name of Penetangore. The current municipality was created in 1999 by the amalgamation of the Town of Kincardine, the Township of Kincardine, and the Township of Bruce.In addition to the main population centre of Kincardine itself (population 6725), the municipality also contains the smaller communities of Armow, Baie du Dore, Bervie, Glammis, Inverhuron, Millarton, North Bruce, Tiverton, and Underwood.On March 5, 1848, Captain Alexander M. MacGregor sailed his little schooner "THE FLY" into the mouth of the Penetangore River. In Ojibwa, Penetangore means "river with sand on one side". This refers to the sand bar at the mouth of the river. Settlers Allan Cameron and William Withers landed their ship at the site of the modern-day town, in that part of Canada West known only as the Queen's Bush, and founded a community called Penetangore. Near where they landed they built a log cabin in which Cameron ran a hotel. Withers built a dam and a sawmill which was opened the following year (1849). By the winter of 1848/49 seven families inhabited the settlement.On January 1, 1850 the Queen's Bush was divided into counties, and the counties were divided into townships. Penetangore now found itself located within the Township of Kincardine in the County of Bruce. Both the township and the county were named after James Bruce, 8th Earl of Elgin and 12th Earl of Kincardine.Francis 'Paddy' Walker arrived in Kincardine (then Penetangore) driving from Goderich on the ice along the Lake Shore, in a horse drawn cutter in the spring of 1850. He brought with him his wife, Jane, and their seven sons. The Walker House Hotel was built that same year, overlooking the Penetangore River.