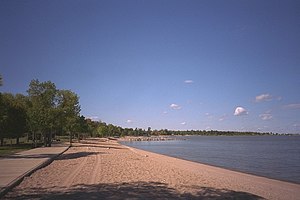 Winnipeg Beach is a town in the Interlake Region, in the Canadian province of Manitoba. The town was founded in 1900 by Sir William Whyte and is located at the junction of Highway 9 and Highway 229 on the southwestern shore of Lake Winnipeg, about 35 miles (56  km) north of Winnipeg. It is bordered by the Rural Municipality of Gimli, the Rural Municipality of St. Andrews, and the Rural Municipality of Dunnottar as well as Lake Winnipeg. Its permanent population is 1,017 (2006). Nearby towns are Ponemah, Whytewold, and Matlock (all to the South), Gimli, and Sandy Hook, (located to the North), as well as Teulon, and Selkirk.In 1900, the Canadian Pacific Railway (CPR) purchased 32 acres (13  ha) of undeveloped shoreline 65 kilometres north of Winnipeg on the southwestern shore of Lake Winnipeg and commenced construction of a resort town. In addition to the attraction of a three kilometre stretch of sandy beach, the CPR also built and offered an array of accommodation, recreation, and amusement facilities, including a prominent dance hall.In the early 1900s, ritzy hotels lined the main street of Winnipeg Beach. Piers, parks and picnic grounds were constructed to accommodate the weekend masses that would travel to Winnipeg Beach from the nearby capital city. By 1913, the summer retreat had become so popular that the CPR had 13 trains running the line between the beach and the City of Winnipeg. The famous Moonlight Special returned to the city at midnight every Saturday for fifty years. The round trip fare was only fifty cents.A boardwalk took strollers along the beach to the carnival concessions and cottages. A wooden roller coaster was one of the largest in the country at the time and carried hundreds of passengers on a busy day. The Pavilion housed a 14,000-square-foot (1,300  m2) dance floor, reputed to be the largest in Western Canada.The romance of Winnipeg Beach began to wane during the 1950s, and although the beach itself still remained a popular destination, in 1964 the amusement park was permanently closed.