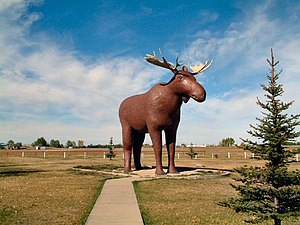 Moose Jaw (Assiniboine: tácehubana ) is a city in south-central Saskatchewan, Canada on the Moose Jaw River. It is situated on the Trans-Canada Highway, 77 km (48 mi) west of Regina. Residents of Moose Jaw are known as Moose Javians. Best known as a retirement and tourist city, it serves as a hub to the hundreds of small towns and farms in the surrounding region of Saskatchewan. The city is surrounded by the Rural Municipality of Moose Jaw No. 161.Marked on a map as Moose Jaw Bone Creek in an 1857 survey by surveyor John Palliser, two theories exist as to how the city got its name. The first is it comes from the Plains Cree name moscstani-sîpiy meaning "a warm place by the river", indicative of the protection from the weather the Coteau range provides to the river valley containing the city and also the Plains Cree word moose gaw, meaning warm breezes. The other is on the map of the city, the Moose Jaw River is shaped like a moose's jaw.Moose Jaw is an industrial centre and an important railway junction for the area's agricultural produce. It is known for its giant historical murals on the exterior walls of buildings in its business district, and its tunnels were used for rum-running during Prohibition. CFB Moose Jaw is a NATO flight training school, and is home to the Snowbirds, Canada's military aerobatic air show flight demonstration team. Moose Jaw also has a casino and geothermal spa.The intersection of the Moose Jaw River and Thunder Creek was chosen and registered in 1881 as a site for a division point for the Canadian Pacific Railway, whose construction was significant in Confederation of Canada. The water supply there was significant for steam locomotives. Settlement began there in 1882 and the city was incorporated in 1903. The railways played an important role in the early development of Moose Jaw, with the city having both a Canadian Pacific Railway Station and a Canadian National Railway Station. A dam was built on the river in 1883 to create a year-round water supply.Moose Jaw is a city of around 35,000 at the intersection of the Trans Canada Highway and Highway 2. A Snowbird aerobatic jet and Mac the Moose are large roadside attractions of Moose Jaw on the #1 highway at the tourist info center. Moose Jaw Trolley Company (1912) is still offering trolley tours of Moose Jaw. Temple Garden's Mineral Spa, Tunnels of Moose Jaw, and History of Transportation Western Development Museum. are major sites of interest of this city. The juncture of Moose Jaw and Thunder Creek produced the best source of water for steam engines, and Moose Jaw became the CPR divisional point. Large capacity concrete grain terminals are replacing the smaller grain elevators which were numerous along the highway, sentinels of most communities along the route. Improved technology for harvest, transport and road construction have made the large inland terminals more viable economically. The rural governing body around Moose Jaw is Moose Jaw No. 161 which serves 1,228 residents (2006 census) which includes the Moose Jaw, Canadian Forces Base. Meat-processing plants, salt, potash, urea fertilizer, anhydrous ammonia and ethanol producers abound in this area with easy transport access to the Trans-Canada Highway. Search Homes for Sale in Neighbourhoods in and around Moose Jaw