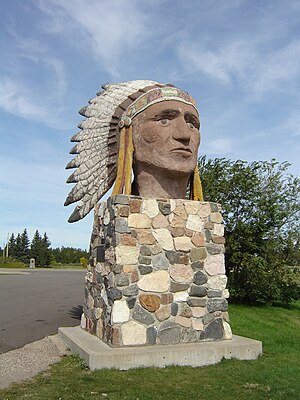 Indian Head is a town in southeast Saskatchewan, Canada, 69 kilometers (43 mi) east of Regina. The town is directly north of the Trans-Canada Highway. It "had its beginnings in 1882 as the first settlers, mainly of Scottish origin, pushed into the area in advance of the railroad, most traveling by ox-cart from Brandon." The town is known for its federally operated experimental farm and tree nursery, which has produced and distributed seedlings for shelter belts since 1901. For many years the programme was run by the Prairie Farm Rehabilitation Administration (PFRA).It was incorporated as a town in 1902. In that year the Canadian Journal, published by James McAra, noted that Indian Head was the largest point of initial shipment of wheat in the world. Today it is run by the Agroforestry Development Centre. Today " has a range of professional services and tradespeople, financial institutions, and a large number of retail establishments." The television sitcom "Little Mosque on the Prairie" which aired on CBC Television 2007-12 was filmed in Toronto, Ontario and Indian Head.Indian Head is located in the Indian Head Plain of the Aspen Parkland ecoregion on the parkland of the Qu'Appelle flood plain. Qu'Appelle's elevation is 579.10 m (1,899.9 ft) above sea level placing it within the topographical region of the Squirrel Hills. The area is characterised by lush rolling grasslands, interspersed with poplar bluffs (in prairie Canadian terminology poplar groves surrounding sloughs) and open sloughs. Indian Head is located in the transition zone between the Qu'Appelle River and the corresponding Qu'Appelle Valley and the Canadian Prairies. The Indianhead Creek flows through Indian Head into the Qu'Appelle River to the north. The legal land description is section 24 - township 18 - range 13 - west of the 2nd meridian. 10 miles (16 km) north of Indian Head are the Fishing Lakes which are part of the Qu'Appelle Valley.Indian Head has a humid continental climate, with extreme seasonal temperatures. It has warm summers and cold winters, with the average daily temperatures ranging from ˆ’16 °C (3.2 °F) in January to 18 °C (64.4 °F) in July. Annually, temperatures exceed 30 °C (86 °F) on an average in late July Typically, summer lasts from late June until late August, and the humidity is seldom uncomfortably high. Winter lasts from November to March, and varies greatly in length and severity. Spring and autumn are both short and highly variable.The 2006 Statistics Canada data estimates the town's population at 1,634 residents, continuing a slight trend of population decline in the town since the 2001 Census, although unusually for prairie towns, Indian Head's population today is larger than in 1916. 49 per cent were male and 51 per cent were female. Children under five accounted for approximately 6.1 per cent of the resident population of Indian Head.