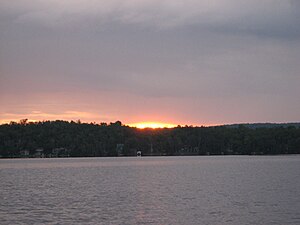 La Minerve is a village and municipality in the Laurentides region of Quebec, Canada, part of the Les Laurentides Regional County Municipality.Located in the Laurentian Mountains, La Minerve is still fairly forested and covered with many lakes, notably Chapleau, Désert, and La Minerve Lakes. Its southern portion is part of the Papineau-Labelle Wildlife Reserve. The area is popular for cottage vacationing. In the summer, the small local population swells with nearly 15,000 tourists.During the years 1880 to 1890, the government granted the first land concessions. The first settler, Isaac Grégoire, arrived in 1885, and in the fall of the same year, notary Joseph Lefebvre, from Waterloo in the Eastern Townships, and some of his friends came to the area taking possession of some lots in La Minerve. Lefebvre opened a flour mill and a sawmill on the shores of Lake Desert.In 1892, the Township of La Minerve and its township municipality were formed. In 1896, the post office opened, named Minerve (but renamed to La Minerve in 1949). In 1897, there were 331 acres (1.34 km²) under cultivation, 13 houses, 4 barns, 40 arpents of fencing (about 2.34 km). Twenty years later in 1917, there were 125 families with a total of 677 inhabitants.On January 1, 1995, La Minerve absorbed the unorganized territories of Lac-Marie-Le Franc and Lac-aux-Castors located in the Labelle and Gagnon townships, but subsequently lost about 20 square kilometres (7.7 sq mi) to the Municipality of Labelle. In 1998, the Township Municipality of La Minerve obtained a new legal status and became the Municipality of La Minerve.