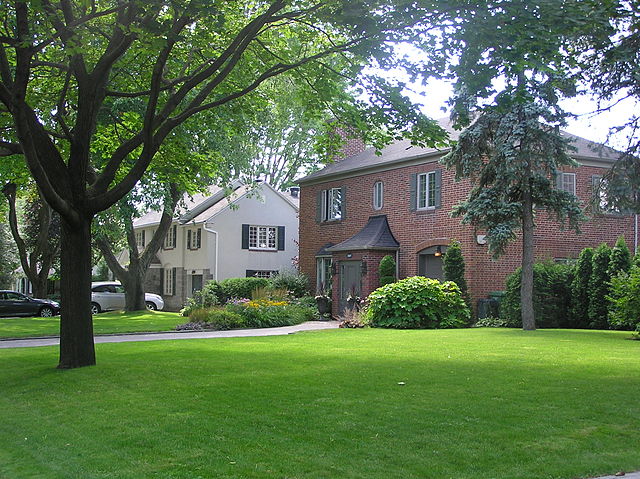 The Town of Mount Royal (abbreviated TMR) (French: Ville de Mont-Royal) (abbreviated VMR) is a town located on the northwest side of Mount Royal, north of Downtown Montreal, on the Island of Montreal in southwestern Quebec, Canada. The town is completely surrounded by Montreal. The population was 19,503 as of the Canada 2011 Census. In 2008, most of the Town of Mount Royal was designated a National Historic Site of Canada, as a " synthesis of urban renewal movements of the early 20th century, reflecting the influence of the City Beautiful, Garden City and Garden Suburb movements". The town is currently celebrating its 100th anniversary (1912-2012).The town was founded in 1912. It was created at the initiative of the Canadian Northern Railway. The town was designed by Frederick Todd, a planner who was heavily influenced by the likes of Ebenezer Howard and incorporated many aspects of the Garden City Movement as well some elements of the earlier City Beautiful movement into his design. The plan was to build a model city at the foot of the mountain. The company bought 4,800 acres (1,900 ha) of farmland, and then built a rail tunnel under Mount Royal connecting their land to downtown Montreal. The profits from the venture helped finance the development of Canadian Northern's transcontinental railroad, which eventually became a significant constituent of the Canadian National Railway system. The town was designed by Canadian Northern's chief engineer, Henry Wicksteed, based loosely on Washington, D.C.The Town of Mount Royal has always been an upper-income community, and until the 1960s its population was majority Anglophone. This began to change after the Quiet Revolution, as francophones gained access to better-paying careers. Mount Royal became popular and today the community is 46% francophone and home to a significant Arab and Asian Canadian population.On January 1, 2002, as part of the 2002-2006 municipal reorganization of Montreal, it was merged into Montreal and became a borough. However, after a change of government and a 2004 referendum, it was re-constituted as an independent town on January 1, 2006.Starting in June 2006, the town began to convert the designations on their bilingual street signs to French only signs, as mandated by law. This came after repeated requests from the Office québécois de la langue française, a provincial agency aimed at promoting French (the official language since 1977) in the province of Quebec (where 80% of the population is French-speaking), and limiting the use of English in public signs and official communications to situations where the Anglophone minority is sufficiently high. Some residents complained and the town agreed to reinstate the English lettering on the signs. The new English designations are now smaller than their official French equivalent, in compliance with the 1993 amendment to the Charter of the French Language. For unknown reasons, there are still street signs for several major boulevards for which the lettering has not been changed back to bilingual.