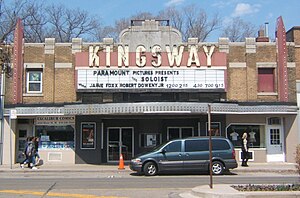 The Kingsway, Toronto, Ontario Real Estate and Homes for Sale

The Kingsway is a residential neighbourhood of Toronto, Ontario, Canada. It is located in the former City of Etobicoke, an area that became the west end of Toronto upon amalgamation in 1998. It is bounded by Bloor Street to the south, Dundas Street to the north, the Mimico Creek to the west and the Humber River to the east. While the area was first known as "Kingsway Park", popular usage drifted to "The Kingsway", that being the name of the main road which winds through the heart of the area. "The Kingsway" is also the name of the Business Improvement Association business district along Bloor Street. The Kingsway is one of the more affluent areas in Toronto, the 2012 average price of a detached house was $1,931,065.For planning purposes the neighbourhood is known officially by the City of Toronto as "Kingsway South" to differentiate it from a more recent extension of The Kingsway north of Dundas Street. "Kingsway South" does not enjoy popular usage owing to confusion with the South Kingsway, a busy street located east of the Humber River and extending south from Bloor Street.The neighbourhood was first developed by Etobicoke lawyer Robert Home Smith who purchased the old King's Mill (which was renamed the Old Mill, reopening as a high-end Inn) and began developing land in the early 1900s. The Kingsway emerged out of Home Smith's vision of the ideal community and was mostly inspired by the Garden City principles, which were originally conceived in parts of England and the United States during the late 19th and early 20th centuries. Indeed, Smith was a big fan of everything English, and this inclination instructed his ideas for the neighbourhood. By the 1920s, those ideas culminated into the development, which he named Kingsway Park.Tastefully appointed traditional homes were sited on well-treed and winding streets, to create an air of a wooded retreat. Home Smith also decreed that no owner could build a house without the approval of his staff, and he developed strict regulations against the cutting of trees. Most of the homes were designed in the Arts and crafts style, which had become popular during that time. Smith insisted on the use of locally-sourced materials for the houses in Kingsway Park, such as sandstone quarried from around the Humber River and Credit River areas.Kingsway Park was aimed at affluent home buyers. Street names such as Queen Anne Road and Kingsgarden Road emphasized the appearance of English respectability and affluence that Smith was selling. Smith also created the Old Mill Restaurant in the community, whose Tudor Revival facade and well-appointed interior inspired much of the English design in the Kingsway.