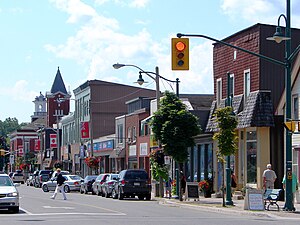 Smith-Ennismore-Lakefield (Selwyn) is a township in central-eastern Ontario, Canada, in Peterborough County.The township comprises the communities of Bridgenorth, Chemong Heights, Chemong Park, Connaught Shore, Deer Bay, Emerald Isle, Ennismore, Fife's Bay, Flood's Landing, Fowlers Corners, Gannon Beach, Gannon Village, Kawartha Park, Kimberley Park, Lakefield, Selwyn, Selwyn Shores, Stewart Heights, Tera View Heights, Tindle Bay, Victoria Springs, Village Meadowa, Windward Sands, Woodland Acres, Young's Cove, Young's Point and Youngstown.The region is mostly rural, home to small villages and hamlets. Farms have been established on most of the flat areas that are intermixed between the rolling hills and lakes. The Trent-Severn Waterway passes through the township.On January 1, 1998, Ennismore and Smith Townships were merged to form the Township of Smith-Ennismore. On January 1, 2001, a Minister's Order created the township in its current form by amalgamating the formerly independent Village of Lakefield with the Township of Smith-Ennismore and part of Douro-Dummer Township. On December 11, 2012 the Township council voted to select a new name after Canada Post notified many residents that addresses would have to be changed to reflect the municipality. By a vote of 3 to 2, the Township council voted to adopt the new name of Selwyn.The region is in the heart of Ontario's eastern 'Cottage Country', where urban residents (mostly from the Toronto region) have cottages on many of the small lakes. Many of the retail and services offered in the region cater to this seasonal market.