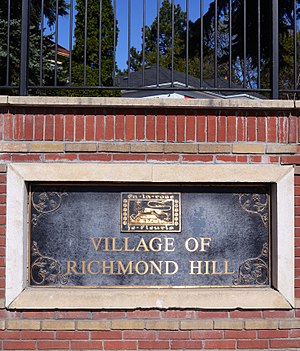 Richmond Hill (2011 population 185,541) is a town located in Southern Ontario, Canada in the central portion of York Region, Ontario. It is part of the Greater Toronto Area, being located about halfway between Toronto and Lake Simcoe. It is bounded by Bloomington Rd. (Aurora town limit) to the north, York Regional road 7 (Vaughan city limit west of Yonge St., Markham town limit east of Yonge St.) to the south, Bathurst St. (Vaughan city limit) to the west, and Ontario Highway 404 (Markham town limit) to the east. It's southern limit is about 4 kilometres (3 miles) north of the Toronto city limit, Steeles Avenue and approximately 20 kilometres (12 miles) north of the downtown core of Toronto. The town extends 14 kilometres north-south and 7 kilometres east-west. It is the third most populous municipality in York Region and the 28th most populous municipality in Canada.Once considered the "Rose Capital of the World", Richmond Hill has in recent years seen a huge population upsurge, being Canada's fastest-growing community in the 1990s. The town is home to the world-renowned David Dunlap Observatory telescope, at one time the second largest telescope in the world, and still the largest in Canada.. It is twinned with Lakeland, Florida.The Regional Municipality of York was established by Bill 102 An Act to Establish the Regional Municipality of York of the provincial parliament, passed on June 26, 1970 and coming into force on January 1, 1971. The act expanded Richmond Hill's borders, annexing parts of Whitchurch Township, Markham Township, Vaughan Township and King Township into Richmond Hill, expanding the area covered from 1,700 acres (6.9 km²) to 27,000 acres (110 km²) and the population from a little over 19,000 to some 34,000. The town grew to encompass the communities of Gormley, Dollar, Langstaff, Carrville, Headford, Elgin Mills, Jefferson, Bond Lake, Temperanceville, Lake Wilcox, Oak Ridges and Richvale. While Richmond Hill was a prosperous, well developed town, many of the outlying areas annexed were far more rural, with dirt roads, no water mains or sewers and no streetlights, and the time needed to bring municipal services up in these areas, combined with residual unequal tax assessments caused considerable conflict in the municipal politics for some time. Policing was taken over by the York Regional Police, but fire protection remained with Richmond Hill, whose firefighting force quickly grew. Having hired its first full-time employee in 1967, it had fourteen full-time employees by 1971.Yonge Street through Richmond Hill expanded from two lanes to four in 1971, relieving congestion on what had become known as "Ontario's worst stretch of highway".The Richmond Hill Dynes Jewellers softball team was the 1972 Softball World Champions. The Royal Canadian Air Farce was recorded at the Curtain Club Theater in Richmond Hill for its first 5 seasons on radio, beginning in 1973. The Air Farce returned for an anniversary recording in the 1990s. Also in 1973 was the centennial of the town's incorporation as a village, and the town set up a number of celebratory activities, including a beard growing contest, commissioning a centennial song, a parade, a street dance and the unveiling of an historic plaque honoring the town's founding in front of the municipal offices. June 27 was officially declared Russell Lynett Day, named after the town's clerk, only the third in its existence. 1973 also saw the sale of the last of the original rose-growing greenhouses in Richmond Hill. Development had led to increasing property taxes and the H.J. Mills greenhouses relocated to Bayview Avenue and Elgin Mill Road. The site of the greenhouses was developed as a subdivision. The fast growing town set aside significant areas for parks, with five new parks dedicated in 1973, and two more in 1974. The Richmond Hill Historical Society was founded in 1973. The society was dedicated to preserving the history of Richmond Hill and raising awareness of the town's history. Their first action was to restore 150 year old house, known as the Burr House.