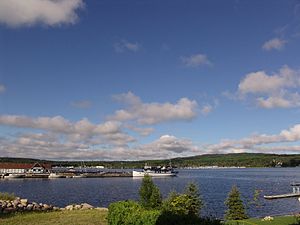 Penetanguishene , sometimes shortened to Penetang, is a town in Simcoe County, Ontario, Canada. It is located on the southeasterly tip of Georgian Bay. Incorporated on February 22, 1882, this bilingual (French and English) community has since grown to a population of 9,354 in the Canada 2006 Census, an increase of 12.5 per cent from its 2001 population of 8,316.The name Penetanguishene is believed to come from either the Wyandot language or from the Abenaki language via the Ojibwa language, meaning "land of the white rolling sands".As early as AD 800, the Huron settled in semi-permanent villages in the area. The young French translator, Étienne Brûlé, was the first European to set foot in the Penetanguishene area, some time between 1610 and 1614.In 1793, John Graves Simcoe, the first Lieutenant Governor of Upper Canada, visited the area and saw the location's potential as a naval base. He wanted to use the bay to shelter warships to protect British interests on lakes Huron, Erie and Michigan. Beginning in 1814, the British-Canadians built the Penetanguishene Road to provide the area a land route to Barrie and Toronto, as it was previously accessible only by water transport along the rivers or across Georgian Bay.In 1817, naval units from Michilimackinac and Schooner Town (near modern-day Wasaga Beach) were consolidated at Penetanguishene. But, because treaty limitations with the U.S. limited both countries' naval power on the Great Lakes, two British armed topsail schooners, HMS Tecumseth and HMS Newash were laid up "in ordinary", and eventually reported to have sunk at their moorings in the harbour in 1828. Some other small craft were headquartered in Penetanguishene for the exploration and mapping of the Great Lakes' coastline. In 1828, the main British military establishment on the Upper Lakes moved from Drummond Island to Penetanguishene. Families of Métis fur traders who had moved with the British from Michilimackinac to Drummond Island after the War of 1812, moved again to Penetanguishene. They settled in the town and the surrounding area. Although the naval base was closed in 1834, the military base remained until 1856. Some of the troops settled in the area after their service was complete providing an English-speaking population.