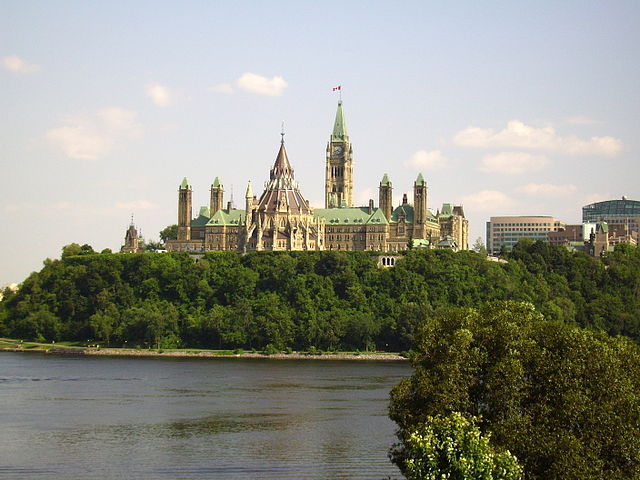 Homes for sale in Ottawa

Location. Located in eastern Ontario, Ottawa lies on the south bank of the Ottawa River across from the city of Hull, Quebec. The distinctive green-roofed Parliament Buildings and the 90-metre Peace Tower dominate the city's downtown. Parliament Hill is the epicentre of Canada's national political scene, home to the House of Commons and the Senate Chambers.

Climate. The Ottawa-Hull region is one of Canada's largest metropolitan areas, yet the two cities maintain a small town atmosphere. Miles of parkland, trees and rivers make Ottawa one of the world's greenest capital cities. It is also one of the world's coldest capitals, with January temperatures ranging from -6° C to -16° C. The cold weather brings lots of snow and freezes the scenic Rideau Canal, a man-made waterway that cuts through the downtown. The canal is popular for ice skating when winter turns it into what Ottawans call the world's longest skating rink. Some residents even skate to work on the frozen canal.

The summer months bring plenty of sun and warm temperatures, though it is sometimes humid. July temperatures typically fall between 15° C and 26° C.

Economy. In its early years, Ottawa was a lumber centre called Bytown. But now the federal government is by far the largest employer. Over 4 million tourists visit Ottawa every year, making tourism an important economic contributor. Ottawa is also a centre for high-tech industry, especially computer related manufacturing.

People. Canada is officially a bilingual country, so many federal civil servants are required to speak both English and French. This, in addition to its close proximity to primarily French-speaking Quebec, has resulted in Ottawa having a large bilingual population. The city also boasts a diverse mix of ethnic backgrounds. Though nearly half of Ottawa's residents are of British ancestry, there are also large groups of French, Italian, German, Arabic and Chinese.

Culture and Recreation. Ottawa is a showcase of Canadian culture. National museums, galleries and landmarks abound. The National Gallery of Canada, besides being home to some of the finest works of Canadian and world artists, is itself a masterpiece of architectural art, with its angular glass walls. Across the river in Hull, the flowing lines of the Canadian Museum of Civilization are also a masterpiece of modern design.

The Parliament Buildings, gothic and gargoyled, are the city's most popular attraction. Here you can catch a guided tour, watch the changing of the guard, view an evening light show and listen to symphony music on the front lawn.

Festivals and events add spice year-round. The annual tulip festival is a popular tourist draw, when more than three million tulips bloom in parks and on the grounds of public buildings throughout the city. Winterlude, a winter festival featuring dog-sled racing, broom ball and harness racing on ice, is held every February.

The Byward Market is a trendy Ottawa district featuring craft shops, fresh produce and meats by day and a vibrant nightclub scene at night. Search Homes for Sale in Neighbourhoods in and around Ottawa

prev next
Back to top