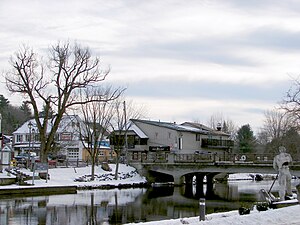 Minden Hills is a township in and the county seat of Haliburton County, Ontario, Canada. It is an amalgamation of the geographical townships of Snowdon, Lutterworth, Anson, Hindon and Minden. It is usually referred to as Minden, after its largest community.The township was formed on January 1, 2001, through the amalgamation of the townships of Lutterworth, Snowdon, and Anson Hindon & Minden.The primary residential and commercial centre of the township is Minden, located just off Highway 35 (44°55'34"N 78°43'33"Wï»¿ / ï»¿44.92611°N 78.72583°Wï»¿ / 44.92611; -78.72583).The township also includes the smaller communities of Blairhampton, Brady Lake, Buller, Carnarvon, Deep Bay, Dutch Line, Gelert, Hindon Hill (ghost town), Howland, Ingoldsby, Irondale, Kilcoo Harbour, Lochlin, Lutterworth, Miners Bay, Moore Falls and Pine Springs.After originally being surveyed in 1858, Minden was named after a town in the North Rhine-Westphalia federal state in Germany. The Minden community has been around since April 1, 1859, prior to which the settlement was originally called Gull River. The original settlers were drawn to the region via the Bobcaygeon Road (an original colonization road) because of its timber resources. The town lies on the banks of the Gull River and during the 19th and 20th centuries, loggers used this river to move timber to sawmills downstream.