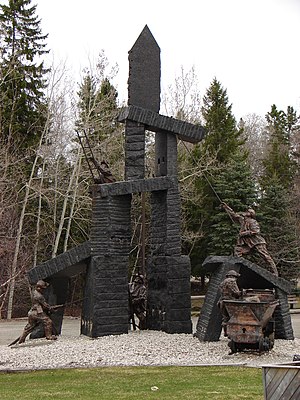 Kirkland Lake is a town and municipality located in Timiskaming District in Northeastern Ontario, Canada. The 2011 population, according to Statistics Canada, was 8,493.The community name was based on a nearby lake which in turn was named after Winnifred Kirkland, a secretary of the Ontario Department of Mines in Toronto. The lake was named by surveyor Louis Rorke in 1907. Ms Kirkland never visited the town, and the lake that bore her name no longer exists because of mine tailings. The community comprises Kirkland Lake, as well as Swastika, Chaput Hughes and Harvey Kirkland.Kirkland Lake was built on gold, but it is equally as well known for producing world-famous hockey players. Indeed, legendary hockey broadcaster Foster Hewitt called Kirkland Lake "the town that made the NHL famous", likely because in the early days of the NHL, it was not uncommon to find an NHLer from the town. The town celebrates this tradition at the Hockey Heritage North museum. Until January 1, 1972, the town was known as Township of Teck. A by-law was introduced, on July 20, 1971 to change the name of the municipality to Town of Kirkland Lake, effective January 1, 1972.In order to maximize taxation revenue from existing and potential mines in the area, the six square mile Municipal Corporation of the Township of Teck was formed with Wellington J. McLeod as the first reeve in 1919. Their first task was the establishment of public utilities, including roads and water pipes, in the rapidly growing area. Kirkland Lake had numerous mines, in the early years, including the Teck-Hughes (1917-1968), Lake Shore (1918-1968), Kirkland Minerals (1919-1960), Wright-Hargreaves (1921-1965), Sylvanite (1927-1961), Tough-Oakes-Burnside (later Toburn) (1913-1953), and Macassa Mine (1933-1999).Early in the Second World War gold production in the area decreased due to personnel being lost to more essential war industries. In 1942, gold mining was declared a non-essential industry to the war effort which resulted in gold mines across the country being at a lower priority for personnel and supplies relative to producers of base metals. After the war, local soldiers returned to the newly created Federal area in the northern section of the town. The Kirkland Lake Cemetery is a member of the Commonwealth War Graves Commission and is the location of the graves of 12 soldiers, and 3 airmen of the Canadian forces who died during the Second World War.