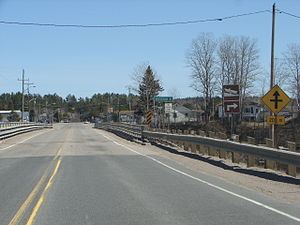 Huron Shores is a township in the Canadian province of Ontario, located along the North Channel of Lake Huron in the Algoma District.The municipality was created in 1999 through the amalgamation of the former townships of Thessalon, Thompson, and Day and Bright Additional, and the former village of Iron Bridge. The town of Thessalon, although surrounded by Huron Shores, is not part of the township.The township's current mayor is Gil Reeves, who succeeded Ted Linley in the 2010 municipal election.The main communities in the township are Iron Bridge, Sowerby and Little Rapids. Smaller communities include Ansonia, Day Mills, Dayton, Dean Lake, Eley, Livingstone, Livingstone Creek, Maple Ridge, Nestorville, Sherwood and Sunset Beach.Originally named Tally-Ho for the call that the lumberjacks would make upon reaching a trading post, Iron Bridge was renamed in the early 1900s after the bridge built over the nearby Mississagi River. Its most notable tourist attractions are its snowmobile trails, nearby wilderness areas for hunting and fishing, and the Voyageur Hiking Trail which passes through the town of Iron Bridge.