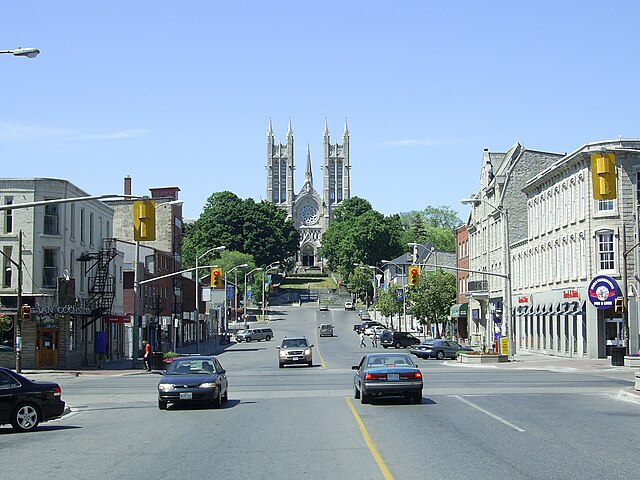 Guelph is a city in Southwestern Ontario, Canada. Known as "The Royal City", Guelph is roughly 28 kilometres (17 mi) east of Waterloo and 100 kilometres (62 mi) west of downtown Toronto at the intersection of Highway 6 and Highway 7. It is the seat of Wellington County, but is politically independent of it. Because of its low crime rates, clean environment and generally high standard of living, Guelph is consistently rated as one of the country's best places to live. Guelph has been noted as having one of the lowest unemployment rates in the country throughout the 2008-2012 global recession, and has ranked at the bottom of Canada's crime severity list for the past five years.The name Guelph comes from the Italian Guelfo and the Bavarian-Germanic Welf. It is a reference to the reigning British monarch at the time Guelph was founded, King George IV, whose family was from the House of Hanover, a younger branch of the House of Welf. Before colonization, the area was considered by the surrounding indigenous communities to be a "neutral" zone. On selected dates members from these communities would meet and trade goods by the Speed River.Guelph was selected as the headquarters of British development firm "the Canada Company" by its first superintendent John Galt, a popular Scottish novelist who designed the town to attract settlers to it and the surrounding countryside. Galt designed the town to resemble a European city centre, complete with squares, broad main streets and narrow side streets, resulting in a variety of block sizes and shapes which are still in place today. The street plan was laid out in a radial street and grid system that branches out from the down-town, a technique which was also employed in other planned towns of this era, such as Buffalo, New York.)The Canada Company established Guelph in 1827 to serve as the company's headquarters during the development of the Huron Tract, although town later came into its own as a prosperous railway and industrial centre. Guelph was founded on St. George's Day, April 23, 1827, the feast day of the patron saint of England. The town was named to honour Britain's royal family, the Hanoverians, who were descended from the Guelfs, the ancestral family of George IV, the reigning British monarch; thus the nickname The Royal City. The directors of the Canada Company had actually wanted the city to be named Goderich, but reluctantly accepted the fait accompli. Search Homes for Sale in Neighbourhoods in and around Guelph