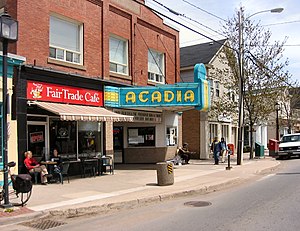 Wolfville is a Canadian town in the Annapolis Valley, Kings County, Nova Scotia, located about 100 kilometres (62  mi) northwest of the provincial capital, Halifax. The town is home to Acadia University, Landmark East School and the Acadia Cinema Cooperative, a non-profit organization that runs the local movie/performance house. It is a popular tourist destination for the scenery of the nearby Bay of Fundy and Gaspereau Valley, as well as for the many cultural attractions which are offered by the university and town. In the past few years, several Victorian houses in Wolfville have been converted to bed and breakfast establishments.The area of Wolfville, from 14,000 BC to 1000 AD was a hunting ground for many First Nations peoples including the Clovis, Laurentian, Bear River, and Shields Archaic groups. They were attracted by the salmon in the Gaspereau River and the agate stone at Cape Blomidon with which they could make stone tools. In around 700 AD, the first Mi'kmaq, related to the Algonquin and Ojibwe peoples, migrated into Nova Scotia and bumped the other tribes out. The Mi'kmaq were seasonal hunters, using dogs and webbed snowshoes to hunt deer, and using the various semi-precious stones (including jasper, quartz, and even amythest) from the Blomidon area to make arrowheads.After an initial effort in 1604 by Pierre Dugua, Sieur de Mons and his cartographer Samuel de Champlain to establish a colony at Saint Croix Island the colony was relocated to the Habitation at Port-Royal. The French and the Mi'kmaq quickly established a reciprocal relationship which continued to serve both peoples well until the mid Eighteenth-century. The French found the area to be rich in furs and fine fertile land. Reports sent to France by individuals such as Samuel de Champlain, Marc Lescarbot and Nicolas Denys proclaimed the rich bounty to be found in the Annapolis Valley area.French settlement efforts continued in fits and starts and by 1636 under Charles de Menou d'Aulnay Port Royal was reestablished after Acadia/Nova Scotia was handed back to the French under the Treaty of Saint-Germain-en-Laye. The progeny of these settlers, as well as the second wave of settlers under Hector d'Andigné de Grandfontaine would eventually become known as the Acadians. By the late 1690s their population numbered about 350. French settlement in the Wolfville area began in about 1680 with a Pierre Melanson establishing his family at Grand-Pré,. The Acadians prospered as farmers by enclosing the estuarine salt marshes with dykes and successfully converting the reclaimed lands into fertile fields for crops and pasturage. In 1710, however, Acadia was lost by the French crown after the English laid siege to Port Royal/Annapolis Royal. Under the 1713 Treaty of Utrecht, signed at the close of the War of the Spanish Succession, Acadia was ceded for the final time to the British. For the next thirty-six years, until the establishment of Halifax in 1749, the British remained at Annapolis Royal and Canso. The French-speaking Catholic population grew over the intervening years to well over 10,000 and the Minas region (Wolfville and environs) quickly became the principle settlement. Acadia was a borderland region between two empires and this caused to develop a complex socio-political environment for the Acadians. Both the British and the French coaxed and threatened the Acadians in attempts to secure their loyalty as is evidenced by the various oaths of allegiance each side attempted to extract from them. This complex situation led many Acadians to attempt to maintain a neutral path; while others either openly supported the French or the British. During the War of the Austrian Succession the Acadians in the Wolfville area were implicated in the Battle of Grand Pré which saw a Canadian military force, reinforced by Mi'kmaq and Acadians, defeat a British force. With the onset of the Seven Years War the Acadians in the Wolfville area, along with all Acadians in peninsular Nova Scotia, suffered under the deportations that took place during the Expulsion of the Acadians,(see also the Bay of Fundy Campaign (1755)). Beginning in September 1755 and continuing into the fall approximately 2,000 Acadians were deported from the area about Wolfville. The villages lying beyond Grand Pré were burned by the British forces and still more buildings were destroyed by both sides during the guerilla war that took place until 1758.Around 1760, the British government in Nova Scotia made several plots of land available in the Annapolis Valley for colonization. Because of pressure on agricultural lands in New England, anglophone farmers moved north in search of fertile land at a reasonable price. It is thought that between 1760 and 1789 more than 8 000 people emigrated to the land around the Annapolis Valley. They settled, and re-used a great deal of the same system that the Acadians had used before them, appropriating and repairing the dykes. In 1763, there were 154 families living in the area of Horton Township. The New England Planters set up a primarily agricultural economy, especially in apples. The first official record of a Baptist church in Canada was that of the Horton Baptist Church (now Wolfville), established on October 29, 1778. The church was established with the assistance of the New Light evangelist Henry Alline. The Baptist movement remained strong in the area and in 1838 lead to the founding of Acadia University as a Baptist college.