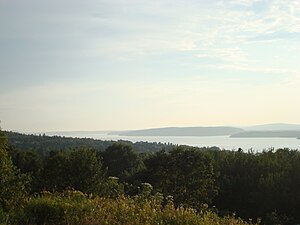 Rothesay is a Canadian town located in Kings County, New Brunswick. It is a suburb of Saint John along the Kennebecasis River.Located along the lower Kennebecasis River valley, Rothesay borders the city of Saint John to the southwest, and the neighbouring town of Quispamsis to the northeast. It is served by a secondary mainline of the Canadian National Railway, though there is no longer any passenger service on the line.The town developed first as a shipbuilding centre and later as a summer home community for Saint John's wealthy elite with the arrival of the European and North American Railway in 1853. The new town was named in honour of the visiting Prince of Wales, later King Edward VII, in 1860 because the area was said to have reminded him of Rothesay, Bute, in Scotland.On January 1, 1998, the former communities of East Riverside-Kingshurst, Fairvale, Renforth, Rothesay and Wells were amalgamated to form the town of Rothesay. The town motto, Quinque luncta In Uno (Five United In One), represents the joining together of the five founding communities.Rothesay contains many historical landmarks, such as The Rothesay Yacht Club (many homes pre-date Confederation), natural parks, and modern amenities. The community provides numerous schools, places of worship, and recreation areas, along with the convenience of local commercial retail and large-scale commercial developments in the nearby city of Saint John.