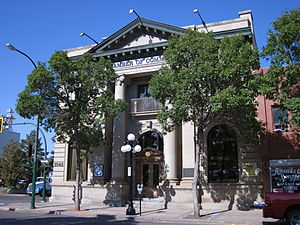 Brandon is the second largest city in Manitoba, Canada, and is located in the southwestern area of the province. The city is located along the Assiniboine River. Spruce Woods Provincial Park and CFB Shilo are a relatively short distance to the southeast of the city. Minnedosa Lake is only half an hour to the north.The city started as a major junction on the Canadian Pacific Railway, and the Assiniboine River and was then incorporated in 1882. Brandon is named after the Brandon Hills in the area which in turn are named after a hill in James Bay. Brandon, the second largest city and service centre in Manitoba after Winnipeg, with a city population of 46,061 and 56,219 people in the metro area, is a major hub for the surrounding agricultural area. The population of its trading area is between 70,000 and 150,000 people. In 2012, the city was ranked as the 6th best place to live in Canada by MoneySense magazine.Brandon's industry reflects its agricultural history; its major industries are related to agriculture and include fertilizer and hog processing plants, as well as retail and government services for the surrounding area of Westman. Brandon is also home to Brandon University and Assiniboine Community College as well as the Brandon Wheat Kings. Brandon's Army Reserve unit is the 26th Field Artillery Regiment, Royal Canadian Artillery, and the Canadian warship HMCS Brandon was named after the city.Prior to the influx of people from Eastern Canada, the area around Brandon was primarily used by the Sioux people, the Bungays, the Yellow Quills, and the Bird Tails. In the 1870s and early 1880s, the Plains Bison were nearly completely wiped out by over-hunting. With the destruction of their staff of life, the buffalo, the nomadic Sioux people began to agree to settle in reservations such as the Sioux Valley Dakota Nation, or left the area entirely.French Canadians also passed through the area on river boats on their way to the Hudson Bay Post, Fort Ellice located near present day St. Lazare, Manitoba. The city of Brandon gets its name from the Blue Hills south of the city, which got their name from a Hudson's Bay trading post known as Brandon House, which got its name from a hill on an island in James Bay where Captain James had anchored his ship in 1631.