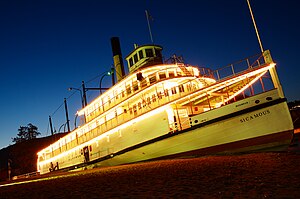 Penticton is a city in the Okanagan Valley of the Southern Interior of British Columbia, Canada, situated between Okanagan and Skaha Lakes. In 2006, its population was 31,909, while its census agglomeration population was 43,313.The name Penticton is derived from a word in the Western Salish. It is conventionally translated by the city's tourism promoters as "a place to stay forever" but is actually a reference to the year-round flow of the Okanagan Lake through Penticton where it enters Skaha Lake. Differing accounts of the meaning are given in the British Columbia Geographical Names Information System entry for the city:Place where water passes beyond. (information from Isaac Harris, published in Vernon News, 18 July 1918); compare with: "Derived from the Okanagan dialect of the Salish tribe, the word Pen-tak-tin meaning 'a place of permanent abode where waters pass by'." (50th Anniversary booklet of Penticton, 1958) From the Indian name Pente-hik-ton, "ever" or "forever" referring to the constant steady flow of the Okanagan River out of the lake.... applied by the Indians to the locality at the outlet of the lake, meaning that the stream ran on ever, or forever, in contrast to other streams which dried up during the summer (6th Report of the Okanagan Historical Society); compare with: "Derives from the Okanagan word Sin-peen-tick-tin, loosely translatable as 'permanent place'." (c1980 advice from Randy Bouchard, BC Indian Language Project).The city was first discovered by the Okanagan people, a tribe of the Interior Salish people, who initially named the community Phthauntac, meaning the "ideal meeting place", followed by Penticton, meaning a "place to stay forever", or officially "a place where people live year-round" in the Okanagan language. They settled around the city's two lakes: the Skaha Lake and Okanagan Lake; the former was originally known as the Dog Lake. Their descendants are based at the Penticton Indian Band, a First Nations government part of the Okanagan Nation Alliance situated near Penticton.In 1866, Irish man Thomas Ellis and his family traveled to Penticton, and became the first white settler. He started to develop a community by building a cattle empire, and planting fruit trees. The Penticton Hotel was established in 1892 by Ellis, who positioned it around the local government area, and its first road: Front Street. The sidewalks on the street was made from wood, with coal oil lamps being introduced to the sidewalk. Ellis and his relatives retired in 1892, and therefore sold a portion of his land to property dealers. Around this time, a number of European fur traders traveled through Penticton, and surrounding communities. Search Homes for Sale in Neighbourhoods in and around Penticton