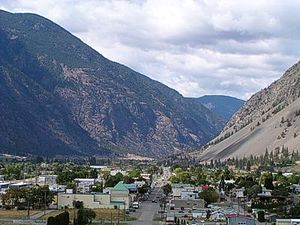 Keremeos is a village in the Southern Interior of British Columbia, Canada. The name originated from the Similkameen dialect of the Okanagan language word "Keremeyeus" meaning "creek which cuts its way through the flats" referring to Keremeos Creek which flows down from the Upper Benchlands to the Similkameen River that runs by the village. Local legend claims the name means "the meeting of the Winds", the constant one from the Pacific through the Fraser Valley is met by the Sonoran from the South and the North winds from the Yukon, due to these mixing of conditions experienced in the village's valley.Keremeos' main industries are horticulture, agriculture, ranching, and wine making, among others. Fruit stands are also a major component of the local economy, making it the self-titled "fruit stand capital of Canada." All sorts of soft fruits, apples, cherries, peaches, etc. and vegetables are grown in the South Similkameen's dry warm climate, and vineyards and wineries are quickly being added as the valley's wine-growing potential is being recognized.With K Mountain as a backdrop, Keremeos, BC is a community, whose "Wild West" looks date back to 1909 when the postmaster of the now-abandoned community of Upper Keremeos, Mr. George Kirby, purchased land alongside the Similkameen River in anticipation of the V.V. & E. Railway passing through the area. He was right and other businesses soon followed. Keremeos was officially incorporated in 1956.Area attractions include Cathedral Provincial Park, the Red Bridge, the Keremeos Columns, the Keremeos Grist Mill, excellent fishing in area lakes and rivers, Apex Mountain Resort, Twin Lakes Golf Resort, Spotted Lake, the Hedley Mining Museum and the Mascot Mine.The geography of the Keremeos area ranges from cottonwood groves along the river, to dense orchards and farms, to desert-like landscapes along the bases of the surrounding mountains, up to alpine peaks and plateaus on top. Search Homes for Sale in Neighbourhoods in and around Keremeos