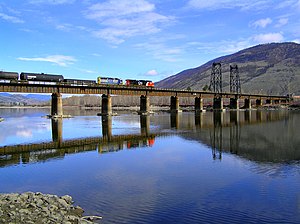 Kamloops is a city in south central British Columbia, at the confluence of the two branches of the Thompson River and near Kamloops Lake. It is the largest community in the Thompson-Nicola Regional District and the location of the regional district's offices. The surrounding region is more commonly referred to as the Thompson Country. It is ranked 37th on the list of the 100 largest metropolitan areas in Canada and represents the 44th largest census agglomeration nationwide, with 85,678 residents in 2011.The Kamloops area was not exclusively inhabited by the Secwepemc (Shuswap) nation (part of the Interior Salish language group) prior to the arrival of European settlers. The Cree-Saulteaux band led by Chief Yawassannay had migrated to this region in the early 15th century. The Yawassanay band's Kamloops settlement was the largest of their three tribal areas. The first European explorers arrived in 1811, in the person of David Stuart, sent out from Fort Astoria, then still a Pacific Fur Company post, and who spent a winter there with the Secwepemc people, with Alexander Ross establishing a post there in May 1812 - "Fort Cumcloups".The rival North West Company established another post - Fort Shuswap - nearby in the same year. The two operations were merged in 1813 when the North West Company officials in the region bought out the operations of the Pacific Fur Company. After the North West Company's forced merger with the Hudson's Bay Company in 1821, the post became known commonly as Thompson's River Post, or Fort Thompson, which over time became known as Fort Kamloops. The post's journals, kept by its Chief Traders, document a series of inter-Indian wars and personalities for the period and also give much insight to the goings-on of the fur companies and their personnel throughout the entire Pacific slope.Soon after the forts were founded, the main local village of the Secwepemc, then headed by a chief named Kwa'lila, was moved close to the trading post in order to control access to its trade, as well as for prestige and protection. With Kwalila's death, the local chieftaincy was passed to his nephew and foster-son Chief Nicola, who led an alliance of Okanagan and Nlaka'pamux people in the plateau country to the south around Stump, Nicola and Douglas Lakes.Relations between Nicola and the fur traders were often tense but in the end Nicola was recognised as a great help to the influx of whites during the gold rush, though admonishing those who had been in parties waging violence and looting on the Okanagan Trail, which led from American territory to the Fraser goldfields. Throughout, Kamloops was an important way station on the route of the Hudson's Bay Brigade Trail, which originally connected Fort Astoria with Fort Alexandria and the other forts in New Caledonia to the north (today's Omineca Country, roughly), and which continued in heavy use through the onset of the Cariboo Gold Rush as the main route to the new goldfields around what was to become Barkerville. Search Homes for Sale in Neighbourhoods in and around Kamloops