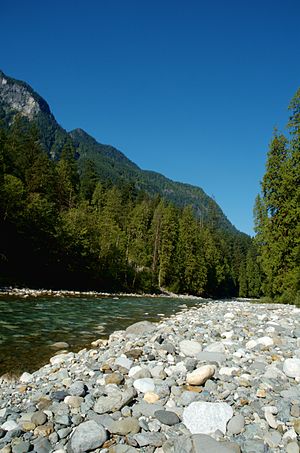 Hope is a district municipality located at the confluence of the Fraser and Coquihalla rivers in the province of British Columbia, Canada. Hope is at the eastern end of both the Fraser Valley and the Lower Mainland region, and is at the southern end of the Fraser Canyon. To the east over the Cascade Mountains is the Interior region, beginning with the Similkameen Country on the farther side of the Allison Pass in Manning Park. Located 154 kilometres (96 mi) east of Vancouver, Hope is at the southern terminus of the Coquihalla Highway and the western terminus of the Crowsnest Highway, locally known as the Hope-Princeton (Highways 5 and 3, respectively), where they merge with the Trans-Canada Highway (Highway 1). Hope is at the eastern terminus of Highway 7. Hope is a member municipality of the Fraser Valley Regional District which provides certain municipal-type services to unincorporated settlements and rural areas.The District of Hope includes Hope Townsite (the previous Town of Hope) and surrounding areas including the communities of Kawkawa Lake, Silver Creek, Flood, and Lake of the Woods. Spuzzum is 'beyond Hope'.The history of Hope can be divided into thousands of years of First Nations settlement and a European settlement period from 1808 to present day.Hope's First Nations settlement period starts with the first traces of people living in the Fraser Valley. These first nation origins date from 8,000 to 10,000 years ago, when the Sto:lo First Nations were in the area. In late 1782 a smallpox epidemic among the Stó:l? killed thousands or an estimated two thirds of the population.The European settlement period of Hope history begins in 1808. Explorer Simon Fraser arrived in what is now Hope in 1808, and the Hudson's Bay Company created the Fort Hope trading post in 1848. The area was transformed by the Fraser Canyon Gold Rush, beginning in 1858. The following year Governor James Douglas laid out the Fort Hope townsite. Hope became part of the Colony of British Columbia when the new British colony was created on 2 August 1858. Along with the rest of British Columbia, Hope became part of Canada in 1871. Late in 1859, Reverend Alexander St. David Francis Pringle arrived in Hope. On December 1 of that year, he founded the first library on the British Columbia mainland. Within two years, he founded Christ Church (Anglican). Today, Christ Church is the oldest church on the B.C. mainland still holding services on its original site and is a National Historic Site of Canada. Hope incorporated as a village (District) on 6 April 1929, became a Town on 1 January 1965, and was reincorporated as a District Municipality named the District of Hope on 7 December 1992. Search Homes for Sale in Neighbourhoods in and around Hope