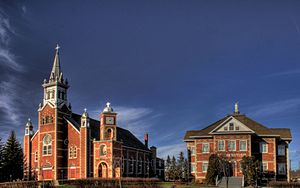 Morinville is a town in central Alberta, Canada. It is located 34 km (21 mi) north of Edmonton on Highway 2.Morinville was settled by Father Morin, an Oblate missionary, who brought many French settlers in the late 1800s, followed by several German pioneers-hence its many French and German families such as Hittinger, Riopel, Boissonnault, Tailleur, Houle, Labonté, St. Laurent, Maisonneuve, Bokenfohr, Krauskopf, Rustemier, and Meyers.The monument located in the St. Jean Baptiste Park lists the many names of pioneers and settlers to Morinville. Once situated on the street at 100 Avenue and 100 Street, the monument was moved to its present location in 2000, as it was a safety hazard and very difficult to enjoy with all the traffic at the intersection.The Roman Catholic Church of the St. Jean Baptiste Parish was built in 1907. The church, along with its adjacent but now inoperative convent Morinville Convent, was declared a historical site in 1975. In 2005, the grounds of the church were landscaped with a clock tower, new grass, trees and shrubs, in celebration of Alberta's 100th anniversary as a province.Morinville has a long history of successful business ventures as one of the first locations in Western Canada to open a Royal Bank of Canada in 1910 and a credit union in 1940. A series of successful international business ventures include Champion Pet Foods that exports around the world.